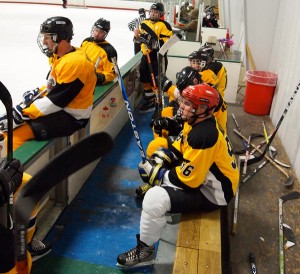 A slow start in the second game of the season turned into a slippery slope for the Squirrels, who gave a lesson in mistake correction and playing a full 45 minutes. Scurvy II got the scoring started early with their star player taking advantage of the coasting Squirrels, skating through both the offense and defense to score unassisted. The Squirrels answered back with a long pass off the boards from Doug Winters to give Tony Richelsen a clear shot at the goalies glove side.
END_OF_DOCUMENT_TOKEN_TO_BE_REPLACED

It’s been quite awhile since the Screaming Squirrels had end game summaries, as their website underwent some long term reconstruction. With the implementation of a new website, you’re beloved game recaps are here once again!

On Saturday January 16th, the Squirrels were matched up against Gnu, and showed no mercy with a 9-1 blowout victory. The first period was rather uneventful as Tony Richelsen got the scoring started with a sliding pass from Mike Bronson, who tripped just before crossing the blue line.

Things started to heat up early in the second period. Bob Valdes netted a goal just over one minute into the period. The Screaming Squirrels welcomed back Jason Nehmer who tallied assists on the next two goals. Mike and Tony finished the scoring for the second period.

The third period is where the Squirrels really turned up the heat, drawing two penalties for two power play goals. The Gnu got their only goal from a mishap with the officials. As the Referee raised his hand signaling a delayed penalty, Eric Coulson came out of the net to touch the puck. Although both Dan Carter and Eric possessed the puck, the officials did not blow the whistle and the Gnu scored on an open net. This lit a fire that resulted in a flurry of goals by the Squirrels to finish the game. Desmond Richelsen and Dan Carter each scored a goal, while Bob Valdes netted two in the final period. Bob and Tony both pulled hat-tricks in the game.