Playing against the top team in the league Sunday, the Screaming Squirrels knew they would have to at the very least shut down two players on the Vikings who not only are too good for the C division, but don’t even wear the same jersey as the rest of the team. The Squirrels succeeded just enough to earn a 3-3 tie.

Brent Machado got the scoring started at 13:48 of the first, but then one of the Vikings’ ringers skated around everyone and got a goal, and the score was tied after the first period.

In the second period, the Squirrels got goals from Ben Sumner and Rob Myers to go up 3-1, but a neutral-zone turnover cost the Squirrels soon after as the Vikings cut the score to 3-2.

The Squirrels had a golden opportunity in the third period with several power plays, including one that lasted four minutes, but instead yielded a shorthanded goal, and the score stood at 3-3.

A couple of turnovers ultimately cost the Squirrels on Sunday as they fell 2-1 to Exit First.

The Squirrels went down 1-0 in the first period after giving up the puck in the neutral zone during a defensive line change, allowing an Exit First player to skate in unchallenged. Exit first went up 2-0 in the second period with a short-handed goal after two turnovers. The Squirrels cut the lead to 2-1 as Chi Pham took the puck almost coast-to-coast and shot it in for his first goal of the season. But that was all the Squirrels could achieve, despite outshooting Exit First 23-19.

The Squirrels entered Wed. night’s contest looking to snap a two-game losing streak. Greg Wenograd put the Squirrels on the board first, but Scurvy answered back shortly after as the teams skated to 1-1 1st period tie.

The Squirrels regained the lead with a power play tally by Desi Richelsen as he skated past several would-be defenders and blasted a shot over the left shoulder of a hapless Scurvy net minder. Not to be outdone, Richelsen’s younger brother Tony scored shortly afterward with a nifty breakaway goal, squeezing the puck just past the goalie’s short side. Later, playing from behind his own net, Chi Pham found a blazing Ed Bager down the middle of the ice for a perfect breakaway feed, which Bager promptly canned after a second whack of the puck as the 2nd period closed with the Squirrels comfortably up 4-1.

Scurvy pulled to within two goals twice but another tally from Wenograd off a turnover and a late goal from Matt Borlik sealed the deal for the Squirrels, 6-3. Drew Thiemann was stellar in net and the Squirrels out shot Scurvy, 34-19. Squirrels missing in action; Ben Sumner, Sergio Balatan, Phil Van der Vossen, Paul Kobernick, Brian Jackson, Donnie and Wade Marks.

On an unrelated note, Desi Richelsen and half the Squirrels came out of the closest shortly after the game as Richelsen led a gang rape of team leading scorer Ed Bager at center ice. Due to the incident Bager will no longer be on the Squirrels active roster. 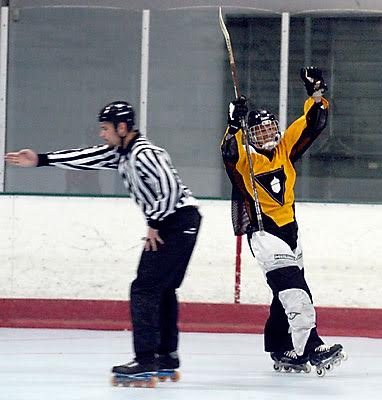 But you’ve also seen him lead the Squirrels to a winning record for every season he’s been on the roster, three of which were championships.

Ed Bager, who is leaving the Squirrels for the hockey-crazy and tobacky-chewin’ state of North Carolina, has played for the Devils/Squirrels since 2002. In 2001, as a member of the Dragons, Bager frequently participated in blowouts against the team when it was known as Recreational Hazzard. In 2002, that team he helped beat, then known as the Devils, recruited Bager as he regularly showed up at Sunday pickup. Since then, not only did he lead the team to winning records and championships, he also recruited players such as Kit Watson and Matt Borlik. 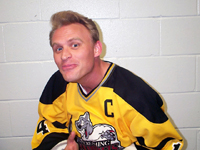 During six seasons in a Squirrels’ jersey (not counting the Devils), Bager compiled 56 goals and 72 assists. He led the roller team in scoring in 2004, and currently leads the ice team with 25 points. He registered a goal and two assists in his final game against Scurvy, a 6-3 victory. After the game, the team piled on.

The team will miss his bottomless pit of energy, scoring touch, the Miller Lite he always brings, his Bethesda house parties, and quite a few other things. No. 14, you will be missed.

In a rare Sat. night game, the Squirrels looked to regain their winning form against the Nordiques. The Nords however had different plans, after falling behind 1-0 on Brent Machado’s first period goal, the Nords scored the next two in the 2nd to take 2-1 lead deep into the 3rd period. The Squirrels evened things up at 2-2 apiece when Tony Richelsen poked in a shot off a feed from Ed Bager. Unfortunately that would be all the scoring for the Squirrels as the Nords knocked in the game winner shortly after and added an insurance goal late to seal the 4-2 win.