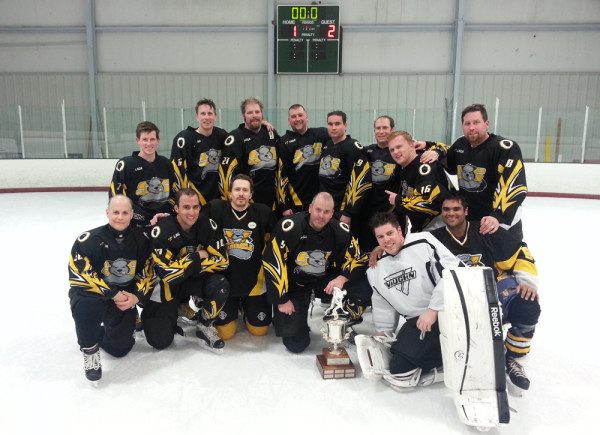 The Screaming Squirrels won their fifth ice championship Thursday, defeating the top-seeded Bullets, 2-1, in the Bronze 2 finals. It was the second consecutive winter season the Squirrels won, though in two different divisions.

The Squirrels caught a huge break in the first period which ultimately decided the game. Only four minutes in, two Bullets took penalties at the same time to give the Squirrels an early 5-on-3. Then, the Bullets took another minor, and the Squirrels cashed in. Don Marks scored on what he called his prettiest one-timer in five years, as his slap shot from the point got through Bullets goalie and sometime-Squirrels sub Adam Hart. Rob Myers scored shortly after.

The Squirrels sat on the 2-goal lead for the rest of the game, as goalie Ryan Griffiths made 24 saves, many under high pressure, to ensure the victory. The Bullets scored on a frantic play with 16 seconds remaining, but it wasn’t enough for them.

During the regular season, the Squirrels had a record of 1-4-1 against the three teams they faced in the playoffs, while ending up a third seed.

The Screaming Squirrels express their gratitude to goalies Ryan Griffiths, who came in as the semi-full time goaltender, Shane Smith, who delivered two clutch playoff wins for the Squirrels, and Adam Hart, who despite losing to the Squirrels in the championship game this year and last year, still subbed for them in those very same seasons.

Just like the last opponent, the Wolfe Pack had the Squirrels’ number all season, but the Squirrels won when it counted the most. The Squirrels advanced to the finals with a 4-3 win on Tuesday.

Jon Danziger scored twice in the first period, including a short handed tally, but two quick goals in the second tied it up for Wolfe Pack. Then the Squirrels found themselves with a 4:24 power play, two of which were 5-on-3, but couldn’t take advantage. But Danziger completed his hattrick shortly after to put the Squirrels back in the lead. Wolfe Pack tied it back up early in the second, then Mark Tessar scored the game-winning goal at 6:15, and the Squirrels held on for the rest of the game.

Sub goalie Shane Smith made 28 saves for the Squirrels, including several clutch ones down the stretch.

The championship game will be against the Bullets on Thursday at 8:30 p.m.