The Screaming Squirrels dismantled Gnu again, 8-1, and will face them in the first round of the playoffs on April 11 at 7 p.m. 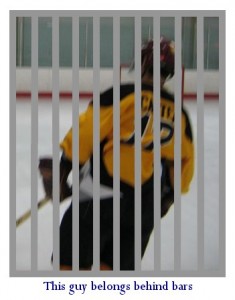 Bagley, but heading into the 3rd period of Sunday’s early afternoon game against the Laughing Skulls, the Squirrels had drawn more penalty calls than they had scored goals.  Defenseman and former league penalty minute leader, Dan Carter, made a strong case that he deserves the title once again this year.  However, after his 4th minor penalty in the 2nd period he was excused from the game by league rule.  Carter, now tied for 2nd with the Skulls’ Francis Conlon at 72 PIM only trails the Vikings’ Eddie Ryland by 2 PIM for the league lead.  “I was kinda hoping they would throw a 10 in there somewhere”, said a dejected Carter after the game. “But you can’t make them change the call.”

With Carter out of the way, the Squirrels managed to calm down in the penalty department and clung precariously to a 5-3 lead in the 3rd period built on goals by Jason Nehmer, Matt Brolik, Dan Carter, Don Marks, and Paul Patrinicola.  Pesky hothead Eddie Zaruba had managed to strike for a pair in addition to a goal by Anthony Campanella to keep the Skulls within striking distance.  That’s when Squirrels forward Tony Richelson took matters into his own hands, first skating past everyone for an easy powerplay goal around the halfway mark of the period and scoring again a little more than 2 minutes later after Borlik netted his 2nd goal of the afternoon.  From there it was lights out for the Skulls.