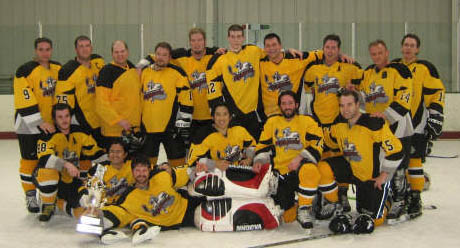 The Screaming Squirrels did exactly what they set out to do at the beginning of the season: Win the championship. Despite finishing in third place in the C3-B division, the Squirrels got hot down the stretch, winning 11 of 12, including a 2-1 victory Monday against top-seeded Dog Star.

The game was exactly what everyone thought it would be: Low scoring, rough, and intense. In the first period, Tony Richelsen took the puck from the left side of the neutral zone, brought the goaltender to his knees and tapped in a shot at 8:50 of the first period.

The 1-0 score stood until 5:45 of the third period. The Squirrels took eight minutes in penalties in the third period, and that came back to haunt them as Timothy Deitz scored from the blue line through a screen on Squirrels goaltender Drew Thiemann.

A minute and a half later, Don Marks missed wide on a slap shot, but the rebound went behind the net to Matt Borlik, who passed to Rob Myers, and Myers scored to give the Squirrels the 2-1 advantage.

Dog Star took a very costly penalty with 1:14 remaining, and the Squirrels killed off the rest of the time. As the clock wound down to zero, the ice was a mess of gloves and sticks as a group hug ensued by the Squirrels net.

Thiemann made 26 saves, while the Squirrels put up 19 shots. Myers almost didn’t make it to the game, as he announced late in the day that he might get stuck at work. A few of the Squirrels suffered injuries during the game, including Ben Sumner, Desi Richelsen and Greg Wenograd, but all eventually got back onto the ice.

Unfortunately, the Squirrels will not be playing summer ice together, but intend on regrouping for the winter season. However, the roller team is back, and they will focus on repeating as champions in that league.

Tony Richelsen has been on a tear lately, scoring 11 goals in the last five games, including two critical ones in the Squirrels’ 4-3 playoff victory against Syracuse on Thursday. The win puts the Squirrels in the championship game Monday against top-seeded Dog Star, who beat the Nordiques earlier in the evening.

Richelsen got the scoring started in the first period, and Don Marks slapped in a shot from the point to give the Squirrels the early lead.

In the second period, Ed Bager shot the puck from the far left side of the net and it somehow got through.

Soon after, Syracuse scored on a slap shot from the blue line, and several minutes later, and the score was suddenly 3-2.

On an extended shift in the third period, Richelsen got a puck to bounce in the net to put the Squirrels back up by two. Syracuse answered on a fast break, but the Squirrels held on with three minutes remaining, killing a penalty in the process.

The Squirrels played without Sergio Balatan and Chi Pham. The Squirrels have lost to Dog Star twice this season, but beat them 4-3 back on March 9.

The championship game is Monday, at 9:30 p.m. in the Logsdon pavilion.

The Screaming Squirrels put an end to Southwest Airlines’ season Sunday with a 6-1 playoff victory in the Patrick rink. The Squirrels move on to the semifinals, where they will face Syracuse on Thursday.

The Squirrels beat Southwest Airlines in all four matchups this season. Syracuse and the Squirrels split their season series, both winning a game.

Sergio Balatan missed the game for the Squirrels.

In the final regular season game of the season Thursday, at the end of the first period, the scoreboard read 2-1. Wrong Stuff was in the lead. Then the Squirrels exploded for seven goals in the second period, four more in the third, and now hope to take the momentum of their 12-2 victory into Sunday’s playoff game.

The game ended as the clock hit 3:50 in the third period as the Squirrels went up by ten. Charles Wolstein, Sergio Balatan, Greg Wenograd and Jon Magi missed the game, while Chi Pham subbed on defense. The game was penalty-free until Desi Richelsen got called for hooking in the third period.

The Squirrels finished the regular season with a 15-5-1 record, good enough for third place pending the outcome of the Mutineers-Syracuse game Thursday. In that case, the Squirrels will play on Sunday, at 8:20 p.m. against Southwest Airlines.