Ed Bager remains the Captain of the Roller Team, with Rob Myers and Matt Borlik serving as Alternate Captains. Ed is currently working on organizing our Roster to register for the next Roller season which will begin in mid-April. We look forward to defending our Championship in The Gardens Icehouse Adult Weeknight League.

History of the Screaming Squirrels

In the summer of 2001, a group of guys (and one girl), signed up for Sunday roller hockey, level C, at the Gardens Ice House. The league promptly scheduled us for Thursdays with only three other teams, one of which â€“ the Dragons â€“ soundly beat us nearly every other week.

This team, with no experience playing together, became Recreational Hazard. We only won one game that season, despite picking up a couple of guys from the Berwyn Heights outdoor rink, where many of us played pickup on Sunday mornings. It was a highly disappointing summer, but the core of us remained
together.

In the fall and winter of 2001/2002, we joined the Rockville Roller Hockey League. Strong-armed by our Jersey teammates, the team became the Devils, despite the objections of the Capitals fans (now, weâ€™re a mixture of Red Wings, Devils, and Caps fans). We played another two lackluster seasons in Rockville, but picked up a few new players and brought them back to Laurel.

In the summer of 2002, we returned to the Gardens Ice House. We had played three sessions together, and had yet to produce a team that could consistently win. However, we were far more comfortable playing together than before. The team was much improved during the summer of 2002, but we were still falling behind our own expectations. After taking the winter off, the team regrouped in the spring of 2003. With the non-Jersey members sick of our team name, we decided to vote for a new one. Of course, most of the
submissions received thumbs-down, but â€œScreaming Squirrelsâ€ was one of the few that didnâ€™t (not that it received many â€˜yesâ€™ votes, either).

A new logo was designed, and we ordered the first batch of jerseys, which arrived several weeks into the regular season. We attribute our initial victories to confusing our opponents by wearing red Devils jerseys while calling ourselves the Squirrels.

The season was a great success despite injuries to a few key players. In first place going into the playoffs, the Squirrels were poised to win their first championship. After cruising through the first two rounds, the team made it to the finals, where they faced the Hurricanes in a best-of-three series. The Squirrels ran away with Game 1, but the Hurricanes regrouped and narrowly won Game 2. That set the stage for Game 3.

It never happened. Hurricane Isabel ripped through the region, knocking power out of the Gardens Ice House for several days. The league cancelled the final game, and officially named us co-champions with the Hurricanes. This was despite the fact that we outscored them in the series, and had a better overall record.

Though we were all disappointed that we couldnâ€™t play that final game, we literally went from worst-to-first. Now, the team has joined Hockey North Americaâ€™s beginner ice hockey league, and has picked up 10 new members. With practice and patience, this branch of the team, too, will rise to the top. Maybe even to level B.

Here you have it, the SquirrelMix, aka the theme song of the Screaming Squirrels. 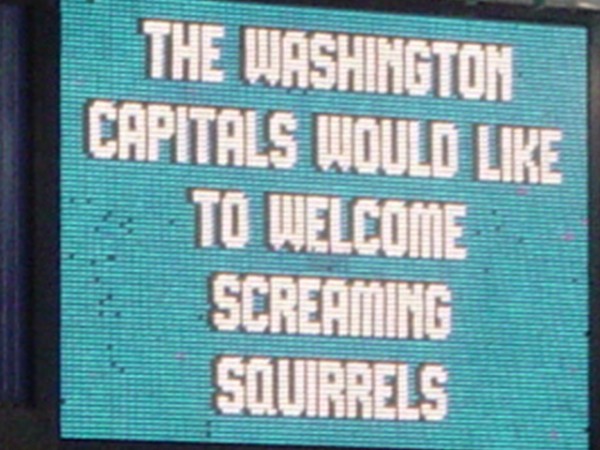 Last night, the Screaming Squirrels attended the Washington Capitals versus Detroit Red Wings game. Even though the Wings won, I think we all had a good time. There were 16 of us total, enough to qualify for group pricing and a personalized message on the scoreboards during intermission. Sergio captured this shot with his digital camera.