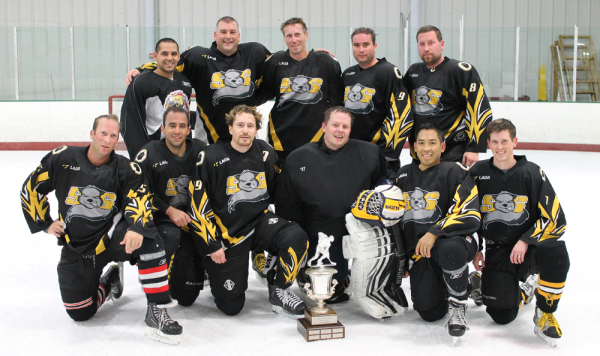 The Squirrels won their first summer league championship on Sunday, defeating the top-seeded D.C. Shooters 5-3 to finish their most successful calendar year in their 14-year history.

Jon Danziger got the scoring started in the first shift of the game, sending a floating shot that somehow found the net. A few minutes later, Don Marks put the Squirrels up 2-0 with a deflected shot up the middle on the power play.

Desperation set it for the D.C. Shooters in the third as they threw everything they had at the net, scoring twice to cut the lead to 5-3 with plenty of time remaining. Even at that point, the Shooters’ fans were on their feet and chanting, but the Squirrels fought hard in the waning moments to seal the victory.

What made the loss even worse for the D.C. Shooters was that it was their only regulation loss all season, as they earned 27 of 28 points in the regular season while beating the Squirrels twice, once in a shootout.

In 2014, the Squirrels won two ice championships and fell short in their roller championship to a team that originally signed up for a higher division. The Squirrels are now gearing up for the winter season, where they’ll be promoted to the Bronze 1 division.

Playing with just seven skaters in the first period, and eight for the rest, the Screaming Squirrels advanced to their second consecutive championship game Sunday with a 3-2 win against the second-seeded Wolfe Pack.

The Squirrels, who finished in third place and had a 1-2 record against Wolfe Pack this season, got a goal from Jon Danziger in the first 20 seconds of the game. Wolfe Pack tied it up in the first, then Charles Wolstein hit a knuckler through several screens to put the Squirrels back on top – this time only 15 seconds into the second period.

About two minutes into the third, the Squirrels turned the puck over in their zone during a breakout, helping Wolfe Pack tie the game.

With tempers flaring and plenty of penalties called in the third, Danziger notched the winner with only 1:35 left in the game. The Squirrels killed off the rest. Merritt Lyon made 30 saves in net.