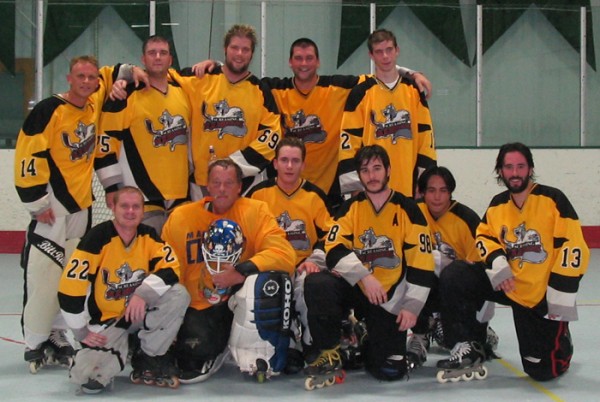 The Screaming Squirrels won the C Division championship Thursday with a 4-2 victory against the Chupacabras. It is the second title in roller hockey for the Squirrels in three years, the first being shared with the Hurricanes because the final game was never played. END_OF_DOCUMENT_TOKEN_TO_BE_REPLACED

Two years removed as co-champions with the Hurricanes, the Screaming Squirrels are going back to the championship game, and they earned the opportunity Tuesday with a 7-0 trouncing of the 5-Holes, a team that finished ahead of them in the standings and beat them twice this season.

Jeff Ford and Ben Sumner together had five goals, and Kit Watson had three assists to lead the Squirrels to victory. Watson, Don Marks, Tony Richelsen and Desi Richelsen shut down the 5-Holes on defense, and Bob Sewell had 15 saves for the shutout.

In the other semi-final earlier in the evening, the Chupacabras upset the top-seeded Hurricanes, 1-0, putting the third and fifth-place teams in the championship game. The Squirrels are 2-0-1 against them this season.

The championship game is Thursday at 9:30 p.m.

The last time the Screaming Squirrels played the Fish, they gave up three goals in the last few minutes to turn a sure victory into an embarrassing loss. The Fish were in position to do the same thing Thursday, but the Squirrels tightened up on defense and held on for a 5-2 win in the playoff quarterfinals.

The Fish scored first, but Ed Bager and Don Marks gave the Squirrels a 2-1 lead after the first period. In the second half, Jeff Ford was alone in front of the net and put in his own rebound to give the Squirrels a 2-goal cushion. The Fish fought back, scoring shorthanded to cut the lead to 3-2. Rob Myers then scored on the same power play and the lead was back to 2, still surmountable as the Squirrels have learned. But the Squirrels held the Fish scoreless in the last 5:27 of the game, and killed a late penalty. Marks capped off the game with an empty-netter as the buzzer sounded.

Bob Sewell, who is listed on both teams’ rosters, made 28 saves for the Squirrels, who posted 24 shots of their own.

The Squirrels will now play last year’s runner-ups, the 5-Holes, on Tuesday at 9:30 p.m. The first-place Hurricanes will play the Chupacabras in the other semifinal game.

Wade Marks and Rob Myers will be missing the rest of the playoffs. Marks is moving to Montana for a job, but says he is still leaving the option open to return to play for the ice team.

In the final regular season game of the season Tuesday, a game that meant nothing in the standings, the Screaming Squirrels finally put together a near-flawless performance against a team that has had their number all year. They came away with a 5-0 victory against the 5 Holes, a win they sorely wanted going into the playoffs.

Don Marks scored the only goal of the first period, maneuvering around with a defenseman draped on him. The goal gave him 30 points for the season, a Squirrels’ record.

The Squirrels blew the game open in the second period with four goals, three on the power play. Tony Richelsen had a goal and Jeff Ford scored two with the odd man-advantage. Ed Bager scored at even strength.

Bob Sewell, who the Squirrels faced twice this season, had a 17-save shutout, and will likely play for them in the playoffs in place of Brian Byrne, who moved to New Jersey last week.

The playoffs start Thursday, August 25, at 8:30 p.m. against the qualifier winner.