The Screaming Squirrels lost their first game of the winter season, falling 5-1 to the Homerhawks in Rockville.

Though the final score showed otherwise, the game wasn’t overly dominated by the Homerhawks, but the Squirrels couldn’t penetrate through their defense and get quality shots on goal.The Squirrels’ lone goal came in the first period when Juan Canchasto centered from the boards to Adam Hughes, who shot it in to tie the score at 1-1. The Squirrels previously lost to the Homerhawks at the end of the Summer season, 5-2.

Next up for the Squirrels are the Cobras, 9:30 at Wells in College Park.

The Screaming Squirrels won their first game of the season Sunday with a 5-0 victory against the Barbarians at Tucker Road. Playing with a shortened roster, the Squirrels showed little rust despite a 16-day layoff. Goaltender Drew Thiemann earned the shutout behind a defense that only allowed 13 shots, the least since allowing five in an August match. Five different goal scorers led the offense while posting 30 shots. Winger Juan Canchasto scored a goal and had two assists while dominating the corners down low, setting up teammates seemingly at will through the Barbarians defense. Defenseman Don Marks tacked on three assists from the blue line.

The game was halted twice in the second period as two Barbarians, including the goaltender, shook off injuries. Ben Sumner, Jared Genser, Greg Wenograd, and Wade Marks also scored for the Squirrels, who will next face the Homerhawks on Sunday in Rockville.

The Summer Ice Season is upon us, and we have already recorded our first victory. The webpage has been updated to include the information on the Summer season. More games will be added to the schedule once we receive them from the league.

The Screaming Squirrels would like to welcome two new members, who will skate on the ice with us this summer. Joseph Wu, who once broke his ankle subbing for us in Rockville, and Wade Marks, brother of longtime Squirrels defenseman Don, are now on the roster. With their help, we hope to bring home another ice championship. 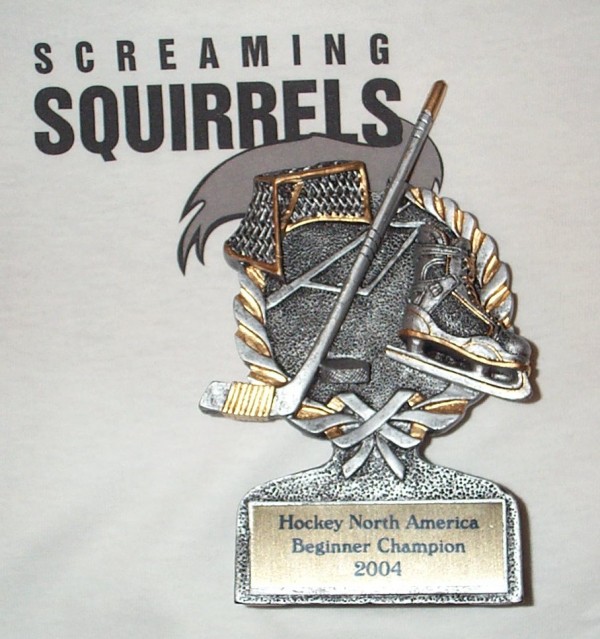